October 4. 1957. It was a Friday evening in Washington, D.C. The Soviet embassy was holding a party in honor of the International Geophysical Year rocket and satellite conference being held in Washington. Over 50 scientists from 13 nations were enjoying the festivities. The top U.S. scientists and officials were in attendance and running high on the confidence that within the next year, they’d be launching the first man-made satellite into near-Earth orbit. New York Times reporter Walter Sullivan was called away from the party to take an urgent phone call from work. After hanging up the receiver, he hurried to U.S. physicist, Lloyd Berkner and whispered in his ear. Berkner collected himself, tapped on the table until quiet fell across the room. “I wish to make an announcement,” he said. He raised his glass to his hosts. “I am informed by the New York Times that a satellite is in orbit at an elevation of 900 kilometers. I wish to congratulate our Soviet colleagues on their accomplishment.”

Thus began the Space Race. The bombshell news of being beat to space by the USSR sent shockwaves across the nation. This was not supposed to happen. We were supposed to be first. We were, or we thought we were, the leaders in both military and scientific technology. But the 20MHz signal being emitted from Sputnik I as it orbited the earth could be heard by anyone with a receiver. In one day, the U.S. went from the perceived superior power on the planet to the perceived runner-up.

Why did we lose?

Because we became too comfortable talking about how awesome we were instead of being awesome. We didn’t do the work or invest the resources into developing the technology and, just as important, developing the scientific minds necessary to be as good as we thought we were.

On a bright side, though, the shock of Sputnik I woke us up. Under the calming leadership of President Dwight D. Eisenhower, we invested the resources to tackle the technical issues of space flight head-on. We also did something at the grassroots level that paid dividends in returning the U.S. to the position of World Leader from the mid-1960s to recent times. We invested in the education and development of our young minds. We valued the greatest resource at our country’s disposal. Our youth.

As part of research around Sputnik I and early satellite programs, I came across this great paper published in The Mathematics Teacher (Vol. 58, No.4, pp.290-294) from April of 1965, Using high school algebra and geometry in Doppler satellite tracking by Robert A. Thompson of The Standard Oil Company. The paper rose out of a Standard Oil workshop at the 1962 NASA Space Science Fair teaching high school students to participate in one of the greatest citizen-science adventures of the 20th Century, tracking satellites by the Doppler shift of their radio signal.

My favorite part of this awesome article is a sidebar at the end outlining the Scientific Manpower Commission’s policy on promoting and developing future scientists and improving the general science education commitment in the United States.

I think these points are well taken and incredibly relevant. We’ve gotten complacent once again. It’s time to invest and value science education as part of a well-rounded education. It’s time to build thinkers from the ground up. Greatness comes in action, not in nonsense spewed from ignorance.

Major scientific problems are facing us. Will we be up to the challenge? Will we have the resolve to respond as we did in the 1960s?

I sure hope so.

And the 1965 Scientific Manpower Commissions policy guide is a damn fine place to start.

The Scientific Manpower Commission, an independent agency representing eleven major scientific societies, in meeting on September 23, 1964, issued a comprehensive policy guide on national scientific and technological manpower problems. Recent uncertainties in the job market and intensive development of means for scrutinizing manpower policy in the government indicate concerns calling for a statement of position. The Commission presented its guide to action in the following statement.

1 That the nation is experiencing rapid scientific and technological expansion which will continue well beyond the immediately foreseeable future;

2 That the nation’s capacity for leadership in world affairs, for national defense, and for essential economic growth are increasingly dependent on a continuously expanding scientific and technological enterprise of high quality;

3 That long-term educational and recruitment policies must be formulated without adverse influence from the pressures of short-term fluctuations of supply and demand;

4 That strong, continued emphasis on science education is justified since such education is not likely to become excessive either for the nation or for the individual, provided its structure allows flexibility, stresses specialization only on the foundation of broad education, and . . . includes the humanities;

5 That scientific inquiry and technological innovation are human intellectual activities requiring a freely competitive and self-disciplined professional environment for maximum development and expression.

Based on these concepts, the policy of the Scientific Manpower Commission shall be:

1 To remind the nation regularly of the importance of conserving scientific manpower by realistic national planning, careful accounting, adequate recruitment and education, and proper utilization;

2 To stimulate the development and dissemination of realistic career information, and to encourage steadily the entrance of qualified students into the scientific and engineering professions;

3 To promote the development of educational programs in the sciences which emphasize a judicious combination of depth with intra and inter-disciplinary breadth, and, above all, quality ;

5 To remind the scientific and engineering community that an undergraduate major in science offers students a broad, liberal education relevant to the needs of society and that future manpower needs include science administrators and others who will apply their knowledge of science to responsibilities in an increasingly wide range of human activities ;

6 To encourage the proper utilization and professional growth of practicing scientific and engineering manpower, including constant reminders to individuals, employers, and professional organizations of their obligation to initiate and maintain programs of continuing education;

8 To advocate strongly the study and identification of worthy targets of potential scientific endeavor, and the manpower implications of each; so that as scientists become available through shifts in projects, retraining of current existing personnel and new recruitment, new projects can be initiated on some established priority schedule without serious disruption in the employment of scientists and engineers. 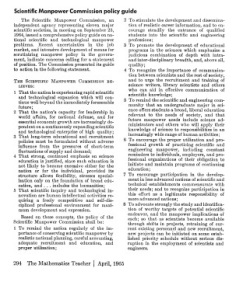