As a former offensive and defensive line football coach, one thing I always look for when watching a game or scouting a game is open/closed gates. What is a gate in football? It’s the ability to stay square and create your space in the contact zone called the line of scrimmage. It’s the same concept as the gate on a fence. When a gate is closed, you can’t walk through it. It’s a barrier. When a gate is closed, you have to do something drastic, like climb over, dig under, or ram through it, to get through. An open gate is just the opposite. It’s no longer a barrier but an invitation to come through.

A defensive lineman’s job is simple. They are assigned a piece of real estate, a gap or area, to protect. Nothing gets through. Nothing knocks the DL from their spot. The job is much easier and much more effective when they play with their gate closed. Opening their gate and turning their hips and shoulders open a running lane.

The same is true for an offensive lineman. Their job is to create open real estate and running lanes on a run play. The job is to clear a path by using your closed gate-created space to either drive the defender away from the running lane, like a snow blade on the front of a truck, or shield a lane for the running back to use.

For pass blocking, the offensive linemen need to provide a protective barrier for the QB in the pocket in order for the QB to feel safe, comfortable, and able to make the throws. Close gates are essential to provide a barrier from the rushing defenders across the line of scrimmage. Closed gates in pass protection reduce the attack alleys of the defense just like a closed gate of a fence makes it harder to enter. Only when a pass rusher breaks the blocker’s hip level does the blocker turn the hips and shoulders to adjust their gate to the threat.

Establishing good technical skills to be an effective offensive and defensive lineman requires excellent footwork, body position, and hand battle skill. Everything a coach should do in practice must be centered around those skills. The footwork is vital. It drives the placement of the hips which drives the placement of the shoulders, which drives the success or failure in a lineman doing their job. (What is good footwork? That, and how to develop good big boy footwork are coming soon in a separate post.)

Practice for perfection when the athletes get tired because physically and mentally tired athletes make mistake because they lose form.

Practice, practice, and practice to keep the gates closed. 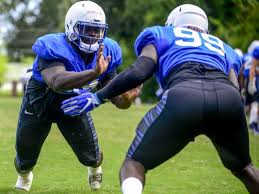 One response to “Gates”