There are so many things one wants to tell young people. The well of advice from us older folks overflows and sometimes floods uncontrollably through and past the minds of our advice-targeted youth. I believe in the power of youth. I believe we can help them achieve great things if we have the discipline to allow them to grow into their potential.

I ran across this quote from Teddy Roosevelt this week in the Brain Pickings post, Theodore Roosevelt on the Cowardice of Cynicism and the Courage to Create Rather Than Criticize.

The poorest way to face life is to face it with a sneer. There are many men who feel a kind of twister pride in cynicism; there are many who confine themselves to criticism of the way others do what they themselves dare not even attempt. There is no more unhealthy being, no man less worthy of respect, than he who either really holds, or feigns to hold, an attitude of sneering disbelief toward all that is great and lofty, whether in achievement or in that noble effort which, even if it fails, comes to second achievement.

It is not the critic who counts; not the man who points out how the strong man stumbles, or where the doer of deeds could have done them better.

The credit belongs to the man who is actually in the arena, whose face is marred by dust and sweat and blood; who strives valiantly; who errs, who comes short again and again, because there is no effort without error and shortcoming; but who does actually strive to do the deeds; who knows great enthusiasms, the great devotions; who spends himself in a worthy cause; who at the best knows in the end the triumph of high achievement, and who at the worst, if he fails, at least fails while daring greatly, so that his place shall never be with those cold and timid souls who neither know victory nor defeat…

The man who does nothing cuts the same sordid figure in the pages of history, whether he be a cynic, or fop, or voluptuary. There is little use for the being whose tepid soul knows nothing of great and generous emotion, of the high pride, the stern belief, the lofty enthusiasm, of the men who quell the storm and ride the thunder.

This piece from President Roosevelt’s 1910 speech is timeless. It’s an important piece for both the young and the old. We need to strive to be the best we can be. We need to strive for greatness instead of limiting achievement with the ceiling of cynicism and status quo.

There is no glory in being the best by trouncing on heads of others.

TR may have said it best, “The poorest way to face life is to face it with a sneer.”

Stand out by standing up. Be a positive force. Dare to be great and then go be great! 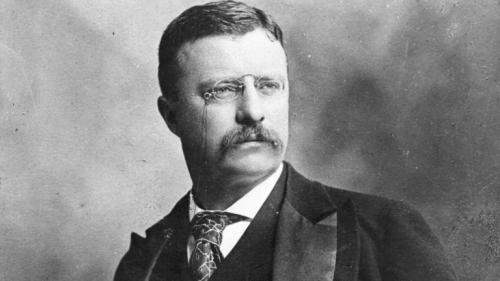