When we think of science fiction, we think of sleek ships with hyperdrives, aliens, high-tech devices and weapons, grand battles, and if we’re lucky, space pirates. The last things that ever pops into our reader/writer sci-fi brains are microbes or on a smaller scale, genes. And that’s too bad because microbes and genetics can be a goldmine for science fiction and fantasy. At the very least, the science-savvy author can use specific science topics to add color and depth to their story world. It’s a win for writers and a win for readers as well. And with NaNoWriMo 2018 just around the corner, I thought it timely to point out the story potential of microbes and genetics for writers of all genres. 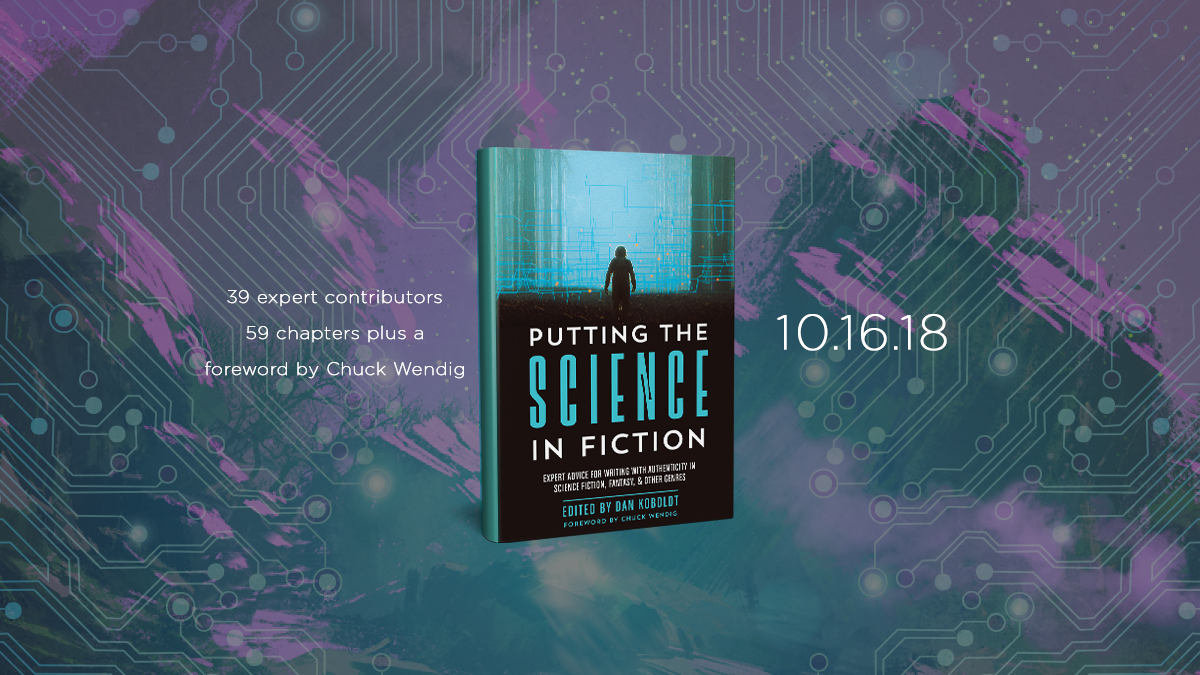 We carry one-hundred-trillion bacteria around with us everywhere we go. They’re beneficial bacteria called our normal flora. Only about 1% of the known bacterial species are actually pathogens. Things like genetic transfer, mutation, and even microgravity can alter microbes to increase virulence, either naturally, by accident, or on purpose. That’s a lot of prospective plagues, right?

And genetics? The human genome itself has about 20,000 protein-coding genes. The control and expression of these genes are an intricate network of up-regulation and down-regulation, called homeostasis, that miraculously keeps us walking and talking and functioning. Nature is amazing!

See what I mean by possibilities? In the mind of a writer, microbes and genetics give us plausible tools to increase the tension and stakes of our stories to put our characters through the ringer. (Insert evil-author-laugh.)

This is one of my favorite types of science fiction. One of my favorite authors, Michael Crichton, used this man vs nature trope to near perfection in two of his books that touch all the buttons for my molecular microbiologist’s soul, The Andromeda Strain and Jurassic Park. In one, a microbe plays front and center and despite all the safeguards man develops to contain nature—well, you know how that all turns out. In the other, man laughs in the face of nature by apparently mastering genetic manipulation in order to bring back the extinct. All the arrogance of man unravels into one mistake after another until—well, you know how that one turns out also.

A microbiome is the collection of microorganisms which exist in a particular environment. It is an intricate system where the microbes modulate the cells of the intestine to benefit both the host and the microorganisms of the gut biome. We are just beginning to scratch the surface on understanding microbiomes, specific populations of bacteria inhabiting a specific part of the body, and their effect on the function of the whole organism.

For example, the intestinal microbiota and the interactions these microbes have with the host gut in the prevention of infection with enteric pathogens. Microbiomes have been associated with immune response, disease, obesity, and even cognitive abilities. One of the coolest examples of a microbiome is the thanatomicrobiome, or the death microbiome. The research group who first described the thanatomicrobiome report a characteristic, time-dependent, post-mortem shift of the bacteria in human tissues from a predominantly aerobic (oxygen loving) bacterial population to an anaerobic population (oxygen hating).

In my Science in SciFi post, Writing Microbes in Outer Space, I highlight research showing bacteria can be affected by microgravity conditions. Bacterial pathogens exhibit structural changes, antibiotic resistance shifts, and shifts in molecular expression when grown in microgravity versus on Earth.

Your Story Prompt Mission #1 is to write a story in which an exposure to microgravity causes a shift in a character’s gut microbiome, like thanatomicrobiome, and results in a positive or negative behavior change that affects the entire well-being of Mars Colony X17984.

The meteoric rise (in science terms) of CRISPR-based gene editing provides great promise for medicine and health. The CRISPR-based gene editing technology is a primitive bacterial immune system that recognizes foreign DNA inside the bacterium and destroys it. For all it’s promise, though, the technology also comes with potential pitfalls, like off-target editing, as well as the ethical and moral questions associated with tinkering with our DNA and genomes.

And then there’s the issue of gene editing in your own home. Yes, the CRISPR technology, with its simplicity, has become popular among citizen scientists. There are take-home kits and plans for setting up home labs available for anyone interested in upping their home hobbyist game. Got a free weekend? Let’s modify that Ficus elastica plant we got mom for Mother’s Day so it won’t be so easy for her to kill it over winter.

Your Story Prompt Mission #2 is to create a future-world assassin who uses CRISPR created, genetically modified bacteria as her weapon of choice.

Just for the fun of it, share your ideas or first few lines in the comments below. As a molecular microbiologist with an author mindset, I can’t wait to read your stories! Here’s the idea for Story Prompt #2 that popped into my head while thinking about this post. Feel free to use it as a jumping off point if you want to.

After the fallout from World Bio-War I and amidst international bans on genetically modified microbes, a former molecular biologist turned assassin creates unique and genetically untraceable bacteria from her underground home laboratory to eliminate the enemies of science currently in control of world politics. Write a story about the preparations for or the execution of her most difficult assignment yet—eliminate a dangerous rising star in the anti-science movement before he gains ultimate power.

I can hear NaNoWriMo calling my name to put this story on paper.

Putting the Science in Fiction

Science and technology have starring roles in a wide range of genres–science fiction, fantasy, thriller, mystery, and more. Unfortunately, many depictions of technical subjects in literature, film, and television are pure fiction. A basic understanding of biology, physics, engineering, and medicine will help you create more realistic stories that satisfy discerning readers.

This book brings together scientists, physicians, engineers, and other experts to help you:

Putting the Science in Fiction collects articles from “Science in Sci-fi, Fact in Fantasy” Dan Koboldt’s popular blog series for authors and fans of speculative fiction. Each article discusses an element of sci-fi or fantasy with an expert in that field. Scientists, engineers, medical professionals, and others share their insights in order to debunk the myths, correct the misconceptions, and offer advice on getting the details right.

Enter a chance to win 1 of 10 copies of Putting the Science in Fiction, a collection of essays from engineers and scientists. Enter below and share on social media for up to three entries.