When you have kids in high school and they’re involved in activities, mid to late spring is a crazy time. There is always something going on. Every year, it seems like it gets past spring break, everyone realizes the school year is winding down and schedules some sort of activity, meeting, meet, etc. to squeeze in before school year’s end. Last March, our local high school held it’s annual Academic Awards/National Honor Society Initiation/Hall of Fame Induction Ceremony event. It was a weeknight during one of the busiest weeks of the year. Since there were no sports heroes I knew personally being inducted into the Hall of Fame, I usually would have stayed home and skipped the event. But, as my kids were part of the academic festivities, I went with the plan of sliding out the back door after they were announced .
I don’t know why, but for some reason, I decided to stay for the the Hall of Fame  induction ceremony to listen to the inductee’s speeches. In the end, what a great decision that was! One of the inductees, Dr. Rachel Schmidt-Brown, Class of 1981, gave an acceptance speech which was pure gold. Dr. Schmidt is a professor of Spanish at the University of Calgary and a world renowned DON QUIXOTE scholar. Basically, she has spent an entire career studying and researching one great work of classic literature. Dr. Schmidt spoke about finding and following your passion in life. Good stuff. But, what really stuck to my ribs was when she spoke about how she sits down every five years and reads DON QUIXOTE.
I just about jumped out of my seat. You mean a person who spends every day of her long and illustrious career studying one book, written in Spanish 400 years ago, reads it for FUN every five years? Huh. Then came the take home message; Dr. Schmidt explained she reads DON QUIXOTE every five years to get a fresh perspective of the manuscript from where she currently is in her life.  She knows she has changed over the five years; changes in family, kids and career. She explained how the story takes a new life; a new meaning with every successive read. What a beautiful concept! 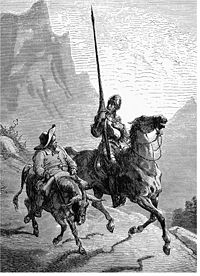 So that got me thinking? What books or stories do I read over and over again? And now that is has been pointed out, how does an older, wiser perspective affect me. Below is my list of stories I read over and again.
Young-At-Heart Novel
THE HOBBIT by J.R.R Tolikien (Always pick up something new with this one, the first story I really fell in love with)
Short Story
PLATTE RIVER by Rick Bass (Great story about ex-football players adjusting to the life after. Plus, I finished reading this the first time at about 2 AM the night before the twins were born, which helps with the emotional bond)
Novel
JURRASIC PARK by Michael Crichton (Science, cloning, thriller, greed, chaos theory and dinosaurs…how can you go wrong here?)
Inspirational
Lenten Gospel Rotation (Every Lent, I read Matthew, Mark, Luke or John in a four year cycle. Always surprised how my life perspective affects the way I read the Gospels.)

Do you have books you read over and over again? How does time and life influence your reads? Please leave a comment, I would like to know.