Football has been on my mind lately. I know what you’re thinking, “Stop the presses! Hays never thinks about sports.” The general consensus has always been, even in the days before I coached the game, that a certain percentage of my total brain function is dedicated to football thought 24/7/365. This is different, though.

My latest football obsession has been triggered by a book (Yes, I said a book.). I’ve been reading (and listening) to Malcolm Gladwell’s book about the misconception of the underdog called DAVID AND GOLIATH: UNDERDOGS, MISFITS, AND THE ART OF BATTLING GIANTS. Gladwell is one of my favorite intellects currently walking this fine planet. Forget the grey-haired, elderly, beer-sipping character from a TV commercial, Malcolm Gladwell may truly be The Most Interesting Man In The World.

Many of the patterns and habit of underdogs—which, by the way, lead to more successes than expected—outlined in the book remind me of the things I learned while coaching. I’ll attempt to touch on some of these learned lessons over the next months on the blog. One of the most important lessons learned was this intricately simplistic, but incredibly effective, definition of the game of football. The “MY BALL!” philosophy of Coach Paul Lane.

In my town, we are perennial underdogs. We have the collective genetics of a lower middleweight wrestler. We aren’t big, we aren’t particularly fast, we aren’t incredibly naturally talented, but we are who we are. If you were to line our Clay Center boy’s teams up before the game at the 50-yard line against the opponent and take a vote on who’ll win from physical appearance only, we’d lose that vote in a landslide 95 times out of 100.

We are who we are.

Being what and who we naturally are, we have to approach things from a non-conventional direction in order to develop into a successful team. We have to think outside the proverbial box because we don’t have the natural athleticism that fits nicely into that box. I don’t mean to be mean-spirited because I loved coaching this tough-minded, hard-working population of kids. It is just the harsh reality—we have to develop competitive teams, not inherit competitive teams.

Coach Lane’s number one teaching point for the Tiger Defense consisted of only two words, MY BALL!. When the opponent had the ball, our job was to physically take our ball back, either by force or by making the opponent punt the ball back to us in three plays. Our goal was to be selfish by taking our ball back whenever the opponent happened to gain possession of it—and take it from them ASAP.

A beautifully simple, yet effective definition of the game that 99.9% of our teenage boys were able to grasp. They could “get it”. Football went from this apparently confusing game of rules and playbooks, and techniques to something they could wrap their young minds around. It’s all about MY BALL.

With this simple mental framework in place, we could teach our kids their jobs and they could understand why they had to do that job. The team needed them to do their job in order for us to get Coach Lane his ball back.

“MY BALL!” made me rethink the game of football and more importantly, rethink how I studied and taught the game of football. Two simple words, one simple philosophy that helped our underdogs as they worked to become successful. David beats Goliath playing the game David’s way and not Goliath’s way. 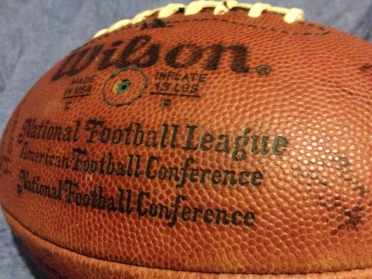 One response to “My Ball!”