Tag Archives: Under the skin

(This is my 350th post on The Coach Hays blog since I first started this dog and pony show in 2009. To celebrate, I thought a proper rant would be fitting. Thanks for reading and I hope I can keep going for at least 350 more.)

It’s about commitment. It’s about grinding through the work and the repetition. It’s the footwork drills. It’s the extra swings. It’s taking the shots after practice or perfecting your jump technique.

It’s the competitor’s mark to be permanently worn under your skin.

It’s a mark you wear with pride. As an individual. As a competitor. As a group. As a team. As a family.

The mark of a winner is burned on your heart. It seeps into every nook and cranny of your competitor spirit.

You do the work necessary. And then you do it again.

Look in the mirror. What do you see? If you don’t like the results you are reaping, look at what you are sowing.

If you don’t like where you’re at, then take the steps to move forward. Sow the good seed.

Ask yourself, “Am I along for the ride or am I going to put this team on my shoulders and rise to the top?”

Commit. Improve. Do the work.

Wear the mark of a competitor. Decide if your mark is a temporary tattoo or if is it written in your marrow.

Be dependable. Be consistent. Be a rock.

Wear your commitment under your skin. As I’ve said before, Be Indelible. 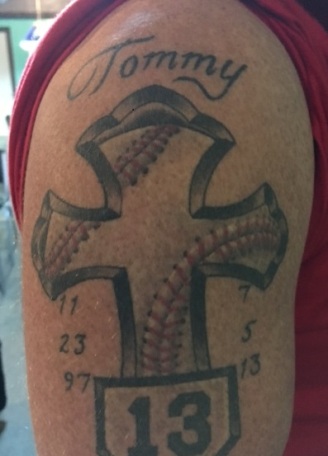