The Boys in Blue are in the World Series against the New York Mets!

But a weird thing happened the morning after they won the ALCS over Toronto. Instead of waking up 100% joyful and ready to roll for the Series, I woke up thinking about two plays from ALCS Game 6 and how these two plays spotlight the value of coaches doing the work necessary for their players.

Both plays, at face value, look totally like big plays made through the exceptional speed and athleticism of those two athletes. But if you look closer, listen to the announcer comments, and the postgame interviews of players and coaches, you begin to see a whole different story.

True, Alex Rios and Lorenzo Cain are two incredibly gifted athletes but that is not what gave them the advantage and confidence to execute those clutch plays on one of the biggest stages of their sport.

What gave both players the edge was the hard work and analysis of the coaches and advanced scouting department.

Yeah. Coaching matters, scouting matters, preparation matters. Hard work IS the magic. Although both plays look to be just a couple of plays of guys running, the amount of time and effort—film study, the scouting report from the scouts following the Blue Jays for the past few months, transfer of that information to the player—are staggering.

Case One – Rios steals second base on a jump he takes off of the first movement home by David Price. Price is difficult to steal on. He’s left handed and although he doesn’t have a great move, he has a quick slide-step delivery which makes it hard for the runner to get an aggressive lead or jump. Scouting appears to have picked up on a tendency for him to sometimes forget about the runner and not give him a “look” when he’s going to pitch the ball to his catcher. For several pitches, he peeks to Rios before delivery to home. On this particular pitch, he doesn’t peek or look to first base and goes straight home, Rios runs on Price’s first movement and is safe with a stolen base–the VERY FIRST stolen base allowed by David Price ALL YEAR. Rios did not end up scoring, but it was a blow to the confidence level of the Blue Jays and added to the pile of things they had to think about.

Scouting, picking up on tendencies, AND being able to relay those details to the player = Makes the game looks easy.

Case Two – Royals third base coach Mike Jirshele and the scouts studied Toronto’s exceptional right fielder, Jose Bautista. They noticed he often fields a ball down the right field line and spins to throw the ball by turning his back toward the infield instead of opening up frontside where he would be able to see the infield all the time. They also noticed he almost always wheels to the blindside and throws the relay to the shortstop positioned around second base.

Coach Jirshele planned on taking advantage of this if, and when, the situation arose. Well, it arose. In fact not only were the players coached this during practices and meetings, but they were given a refresher before game six AND Coach Jirshelle revisited this with Cain and Hosmer BEFORE the inning even started since they were due to bat.

As a coach, when you watch hours and hours of film or live action, you begin to see patterns. When you rewind and watch a play over and over a dozen times or more, the structure patterns emerge. These patterns become tendencies when put together and analyzed.

The word “Coach” must be used as a verb, rather than just as a noun.

As a coach, do the work necessary to put your team in a position to succeed. 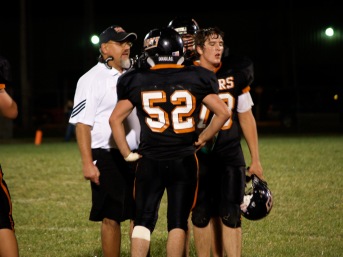